An important election year in Nillumbik

Council elections are held every four years in Victoria, and 2020 is an election year. They are due in October, by which time we hope and expect the Covid-19 crisis will have passed.

There’s a lot at stake this year in Nillumbik. 2016 saw the emergence of  lobby group PALS, a closed Facebook Group whose stated position was and continues to be that the owners of green wedge properties should be allowed to look after their land as they see fit, without the interference of regulation – a recipe for the gradual loss of the green wedge as we know it. They ran a campaign which focused on two amendments proposed by the former council which aimed to enhance green wedge protections. Few had any real idea as to what these amendments contained but that didn’t stop a fear campaign bearing fruit. Self-described PALS founder Karen Egan was elected in Bunjil Ward and Jane Ashton in North Warrandyte’s Sugarloaf Ward. Together with Cr Peter Clarke and Cr Bruce Rankin they formed a voting bloc of four out of seven councillors which   has consistently put development and self-interest ahead of respect for the planning system and the protection of our green wedge.

The new Council’s position was signalled early. In 2017 it decided to approve a development application which had been judged inappropriate by council officers. This application proposed a football oval-sized clearing on a ridgeline and the removal of over 700 trees from a property zoned Rural Conservation in Pigeon Bank Road, North Warrandyte.  The Council ignored the advice of their own experts without revealing their rationale. As a result of a community campaign which involved not only VCAT but the Supreme Court the application was withdrawn by the developer.

With this decision the new council demonstrated not only their view of the green wedge, but also their ignorance of and lack of respect for the State Planning Provisions and the Local Planning Scheme.

The council attempted to subvert the Planning Scheme in a similar way in relation to an application to inappropriately develop a property in Barreenong Road, Cottles Bridge. Again, Council failed to uphold the recommendation by its own planning officers that the application be refused, so it was left to the community to object at VCAT, which disallowed the development.

These failures involved both the applicant and ratepayers in misguided expense and forced the community to devote time and money to compensate for the Council’s failure to properly administer the Planning Scheme.

All green wedge councils are obliged to create a Green Wedge Management Plan. Nillumbik’s first GWMP was created in 2010 and was designed to serve, with review, until 2025. For reasons not explained this Council decided that it should be replaced early. Perhaps to justify the project they launched an extensive program to find out what the community thought about the green wedge. This entire project is estimated to have cost in the vicinity of $500,000 and culminated in a ‘Community Panel’, 40 randomly selected residents whose recommendations were supposed to ‘inform’ the new plan.

Perhaps surprisingly to the Council, but to few others, it turned out that the community valued our green wedge and overwhelmingly supported its care and preservation. So it was somewhat astonishing when the council rejected key recommendations, watered down others and produced a draft at odds with the recommendations of their own panel.  Following a torrent of negative community comments, including a submission from a majority of the community panel, minor modifications were made but the general drift away from environmental protection remained.

In 2018 Council proposed to sell 17 community reserves in Eltham to prop up its budget. It turned out that these reserves were a valued community asset, as an outcry finally managed to curtail the program. Upwards of three thousand people turned up at a rally to in March to protest the scheme. Points made by speakers at the rally included the heartfelt and personal, such as the young woman who related the importance to her family of the reserve next door to the house in which she grew up. As local historian Andrew Lemon remarked, “the contest is between short term fiscal expediency and adhering to the intelligent public town planning policies that helped shape Eltham”.  A clear case of a Council at odds with its own community.

Possibly the greatest damage wrought by this Council has been that done to the permanent organization. Council efficiency and effectiveness depends upon the knowledge accumulated over time by its officers. This Council has presided over a cavalier clean out from CEO down and including all senior planning staff. We read in the Victorian press of staff on Casey Council being fired in accordance with the wishes of a developer. Did anything like that happen in Nillumbik? This sort of organization change is costly in terms of payouts and hiring charges, but the really significant issue is the loss of expertise, which will take years to repair.

The majority of the current Nillumbik Council have clearly demonstrated their lack of respect for the planning scheme and for their responsibility to the green wedge Shire. This is despite the fact that their own community consultation project confirmed that the overwhelming view of the community is for more, not less protection for our green wedge.

Wedge Tales is supported by the Warrandyte Community Association, the Friends of Nillumbik and also the Green Wedge Protection Group. We must make sure that next October brings a cure for what ails our Council. If you care about our green wedge shire and would consider standing as a candidate in any of Nillumbik’s seven wards at next October’s elections let us know by email.

Not to forget Manningham:  North Warrandyte is in Nillumbik’s Sugarloaf Ward while South of the River, Warrandyte is in Mullum Mullum Ward, Manningham. To be a candidate for a Ward you need to live in the electorate, either Nillumbik or Manningham, but not necessarily the ward.

Please also let us know if you are keen to be involved in the campaign to get Wedge-friendly candidates elected, again by email, with your contact details. . 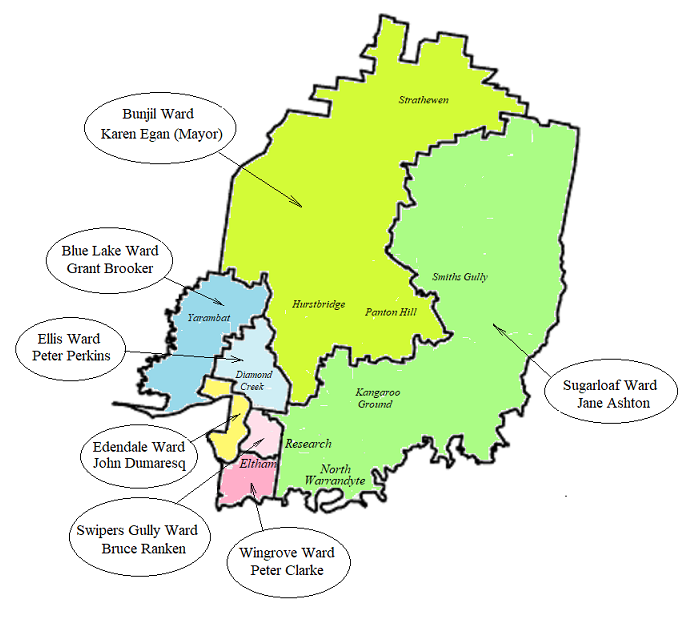 A map with more location detail is here.