Ballot packs will be mailed out from today, October 6, so should arrive in your letterbox within a week or so. Voting is compulsory, and you have until before last mail collection on Friday October 23 to post your completed ballot

The 2016 Council has been ruled by a voting bloc of four, led by Peter Clarke, Mayor, Deputy Mayor and Wingrove councillor. He was supported by Bruce Ranken of Swipers Gully and two anti-green wedge regulation councillors, current Mayor Egan of Bunjil ward and Sugarloaf’s Jane Ashton. As we have documented at some length, this group have been responsible for consistent attempts to subvert or weaken the planning scheme, wasteful expenditure and the decimation of the council organization.

Three of this bloc are not standing for re-election: Peter Clarke is standing for the Melbourne City Council, Bruce Ranken no longer lives in Nillumbik and Jane Ashton has decided she has done enough. But replacements who would continue their damaging, pro-development, anti-regulation path are on offer. The new Council will be faced with a significant restoration task. This is our opportunity to get our Shire back on track, to elect councillors who will be up to the task.

We have used our best endeavours to identify those candidates who would be most likely to contribute to the good governance of our Green Wedge Shire, and in some cases those to beware.

We included one or more ‘how to vote’ cards for each ward, so follow one of those unless you have additional relevant information. Your ballot paper will indicate your ward. Click on its link below to see our recommendation: 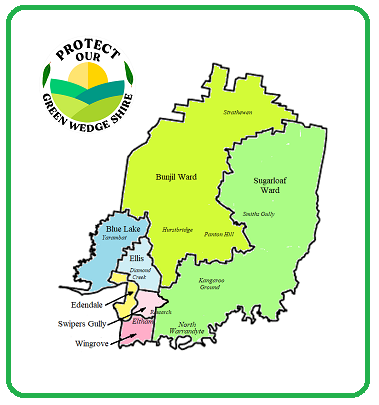