The results are well and truly in, and they’re mostly good news. The majority anti-regulation, pro-development voting bloc is no longer, so we stand a chance that the new council will do justice to our green wedge shire.

In Sugarloaf, vacated by PALS-supported Jane Ashton, our recommendation was to choose between Ben Ramcharan and Don Vincent, both candidates with strong green wedge credentials. Ben prevailed by a significant margin, getting 28.8% of first preference votes, well ahead of the next candidate, PALS-supported Narelle Campbell, who attracted half as many.

In Edendale, held by John Dumaresq, we recommended you vote for ether John or Natalie Duffy. Natalie prevailed over John, with daylight next. We welcome Natalie, from whom we expect a great contribution, but we commiserate with John, who has consistently stood up for good governance in the face of the successive outrages of the outgoing council.

Eltham-Research ward Swipers Gully had been held by Clarke follower Bruce Ranken until he resigned recently, having left the Shire. Our choice turned out to be the community’s choice: Francis Eyre won decisively.

A good result in Ellis, the ward centred on Diamond Creek, apparently never in doubt. Only three candidates – compared with sixteen (!) in Sugarloaf – and  won on first preferences by incumbent Peter Perkins. Having fought the many unfortunate efforts of the previous council, he could be ready to play an important positive role in the new one.

In the other big rural ward, Bunjil, we would have liked Steve Mullins or Sarah Hunter to win, but PALS founder Karen Egan scraped home by  24 votes, after preferences – not much of an endorsement after two years as Mayor. As a member of the Clarke faction in the outgoing council Egan was a significant part of the green wedge problem, but will face a different situation without her voting bloc.

And unfortunately, incumbent Grant Brooker failed in Yarrambat ward Blue Lake – a casualty of the preferential voting system. As we explained previously, the preferential voting system when applied to single councillor wards almost requires serious candidates to find ‘running mates’ who will collect votes and pass on their preferences. Grant elected not to play this game, and despite 31% of the ward putting him first, with almost twice as many votes as any other candidate, he did not prevail. The new Councillor for Blue Lake is Richard Stockman. He made no mention of the green wedge in campaigning that we know of, so time will tell. We offer tentative good wishes!

Overall, a very successful campaign, resulting in the removal of a distinct problem flavour from the Nillumbik Council. But the challenge facing the new Council is complex. The outgoing Council engineered wholesale turnover of staff, including the CEO and all experienced planning staff, and surely  created a pro-development, anti-environment context for the new people to operate in. To establish a new direction and professional standards in the organization will require a coherent approach. 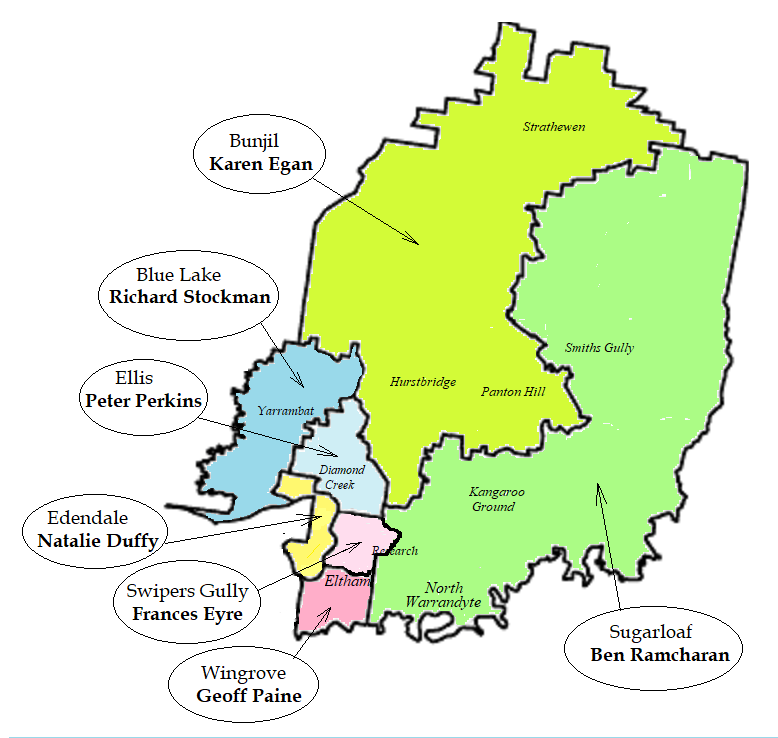